The following quotation from the Handbook reads:

It is desirable that the practice of the legionary devotion to Mary should be rounded off and given the distinctive character which has been taught by St. Louis-Marie de Montfort under the titles of "The True Devotion" or the "Slavery of Mary", and which is enshrined in his two books, True Devotion to the Blessed Virgin and the Secret of Mary.

That Devotion requires the formal entry into a compact with Mary, whereby one gives to her one's whole self, with all its thoughts and deeds and possessions, both spiritual and temporal, past, present, and future, without the reservation of the smallest part or slightest little thing. In a word, the giver places himself in a condition equivalent to that of a slave possessing nothing of his own, and wholly dependent on, and utterly at the disposal of Mary.

But the earthly slave is far freer than the slave of Mary. The former remains master of his thoughts and inner life, and thus may be free in everything that matters to him. But the surrender to Mary bears with it everything: each thought, the movements of the soul, the hidden riches, the inmost self. All ? on to the final breath ? is committed to her that she may expend it all for God. It is a sort of martyrdom, the sacrifice of self to God, with Mary as the altar of that sacrifice. How conformed, indeed, to the sacrifice of Christ himself, which likewise began in Mary's bosom, was publicly confirmed in the arms of Mary uplifted in the presentation, embraced every moment of his life, and was consummated on Calvary on the cross of Mary's heart. (Handbook, pages 37?38).


"By its fruit you will know it" (Mt. 12:33). The place in France, the year is 1716. At eight o'clock in the evening it is all over. The whole district quivers at the news of Fr. Grignion's death. The roads are crowded with the converts streaming for a last farewell. Rosary beads, crucifixes and medals by the thousand are being brought to touch his body. So vast are the crowds that a guard has to be set around his coffin. He is buried on the afternoon of April 29th where he would have asked to be, in the chapel of his mother. His career is over, or rather, it is just beginning

Today this man is known to us as Saint Louis?Marie Grignion de Montfort. He founded two religious congregations, one of men and one of women, and yet he died at the early age of 43 years after only 16 years of priesthood. Through his teaching of the True Devotion to Mary he was instrumental in the conversion of countless heretics.

In his book Fr. Grignion recorded the following fascinating prophecy: "I clearly foresee that raging brutes will come in fury to tear with their diabolic teeth this little writing and him whom the Holy Ghost has used to write it, or, at least to enclose it in the silence of a coffer in order that it may not appear". Nevertheless he predicted both the appearance of the book and its success. It is of interest to note that while Fr. Grignion died in 1716, his book was not found until 1842.

Another person who read and practised the True Devotion to Mary was the reformed alcoholic Matt Talbot. Many find the book a difficult one to read and yet Matt Talbot, an uneducated saintly man, mastered it and took to himself its spirit. It was one of the most marked books on his shelf. Referring to this book afterwards, in connection with the wearing of a chain, Matt remarked that he "had read of a devotion which lifted him from earth to heaven". The world now knows of its impact on Matt Talbot.

Dublin 1917 was a city of great poverty. The St. Vincent de Paul Society was making strenuous efforts to combat this. One day a group of ladies volunteered their services. Their offer was accepted and one of the brothers was put in charge of them. He was a young civil servant named Frank Duff.

\Frank was introduced to a book by a friend. It was "The True Devotion to Mary". Upon finishing the book, he wasn't very impressed. He though it was a bit excessive. This is what Frank later said "I still have recollections of that first reading. The book was laid aside. I would not have opened it again but for the dear tyranny of a friend. He exacted repeated readings, which were grudgingly conceded. Then gradually it dawned on me that the book was an inspired production, that it was right and I was wrong; what it said was true and had the character of a special message; the excesses which I thought I found were really deficiencies in myself, wide gaps in knowledge and apprehension. I realised that I must try to fill them in and to some extent succeeded. Ever since, the book has been a source of light to me so that I add myself to those, who bless the day in which it came to them".

Frank began to give talks on the subject to his group and eventually the question was put: "Why don't we try to put this into practice?" From that a meeting was held ? the first ever Legion of Mary meeting. Frank recalls: "It was just like making an electric connection and something happened. We spent the evening talking about the Devotion. I do not say, that even so, we understood it fully, but at least we were in ardent sympathy with it. We desired to practice it. Then at once the Legion happened. A meeting was arranged: 8 p.m. September 7th, 1921, the eve of Our Lady's birthday. It was really born with Mary". So we see that the Legion was the fruit of the True Devotion to Mary.

Alfie Lambe and Edel Quinn also practised the True Devotion to Mary. Both of their causes for beatification have been introduced and Edel's is already at an advanced stage. While in our own day, Pope John Paul II adds his name to this distinguished list.

Frank Duff's cause was introduced and accepted on the 4th June 1996 and he is now to be referred to as the Servant of God.

I mention the fruits of De Montfort's life: countless heretics converted, two religious congregations established, also the heroic life of Matt Talbot, as well as Frank Duff, the Legion of Mary, Alfie Lambe, Edel Quinn and Pope John Paul II for one reason - to show the marvellous effects that the True Devotion to Mary can have on one's life if one takes it seriously 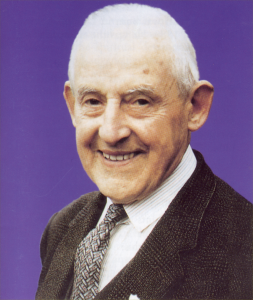